When the San Lorenzo Valley Unified School District in Felton, Calif., purchased its first Grasshopper in 2009, the district was looking to improve efficiency and reduce costs associated with grounds maintenance. "This was our first Grasshopper, so it was going to be a new experience, says Steve Burley, director of maintenance, operations and transportation. Burley says he was especially drawn to the potential benefits of Grasshoppers one-machine, multiple-tasks system. So, the district purchased a FrontMount 930D with a PowerVac Collection System and an AERA-vator, and Burley has been pleased with the decision. Were in the process of converting all transportation and maintenance equipment to diesel, he says. Diesels are more fuel efficient and we can buy the fuel in bulk, which dramatically reduces the cost of fuel. Not only has the MaxTorque diesel 930D helped reduce fuel costs, Burley says it has improved mowing and aeration efficiency. One grounds crewmember is responsible for mowing three elementary campuses, so time efficiency of mowing and aeration is important, since the same person must also complete other maintenance tasks at each location. There arent any lawns around the buildings to speak of, but each school has a large playfield and an adjoining softball field for outdoor activities, says Burley. Hes out there mowing every week. Usually side-discharge, but we collect clippings every so often. He says that the Grasshoppers make faster work of the mowing, even with smaller 61-inch decks compared to 72-inch decks on the other mowers. He says the Grasshopper deck is built better, and better designed, which leaves a much cleaner and more consistent, even cut. We used to use a pull-behind mower at those schools, but we had to mow all the way down a row, lift the deck and turn around, or else wed tear up the turf, Burley says. But the Grasshopper can maneuver so much easier, without raising the deck, anywhere in the field, and the cut is still perfect. In addition to the improved quality and efficiency of mowing, Burley says that the AERA-vator has been a very good addition to the operation as well. Since the playing fields are high-traffic areas, they aerate several times throughout the year to relieve the compaction and keep the soil and turf healthy. Before purchasing the Grasshopper and AERA-vator, they would use a large tractor with a pull-behind core aerator. It did the job, but compared to the Grasshopper, it wasnt the best suited, he says. Being a pull-behind, it couldnt get into all the areas we needed to get to, and it left plugs, so there was a bit of a safety concern with all the kids running around on the fields. He says the AERA-vator is completely different. With the front-mounted design, they are able to get into the spaces they couldnt previously reach, and there are no plugs to worry about afterward. And by retaining the zero-turn maneuverability of the Grasshopper, the job is completed much faster. Burley knew the Grasshopper would be a good solution for district, but its done much more than he anticipated. Its a good, well built mower that serves our purposes well, he says. We have been able to replace several pieces of stand-alone equipment with just one multipurpose machine. And while the Grasshopper experience has been new, its been worthwhile. It is a just better piece of equipment, Burley says. Its been a great experience and an investment that will continue to pay dividends for the district well into the future. 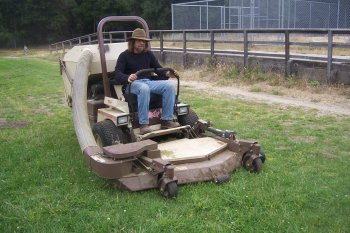