When considering a new equipment purchase, it is important to take into consideration long-term revenues and costs versus short-term "bargains" that result in higher operating costs and lower productivity. With a 3-cylinder, liquid-cooled diesel-powered model, there are five areas of savings to be realized over the life of the mower:

Although diesel typically costs more per gallon than gasoline and propane, you still save considerable money using diesel based on fuel economy alone. The average national prices for gasoline, LPG and diesel as of December 7, 2015 were $2.05, $1.97 and $2.38, respectively. Based strictly on fuel economy, it requires 900 more gallons of gasoline, and 1,050 more gallons of LPG, over 1,000 hours than using diesel. Consequently, diesel saves nearly $3,000 compared to gasoline and $1,200 compared to LPG over the course of an average 1,000-hour mowing season.

The fuel savings in one year alone can justify the difference in the acquisition cost of the diesel mower compared to gasoline or LPG mowers. Using the diesel mower over two or three seasons just adds more savings to the bottom line.

Combining purchase price and fuel usage, MaxTorque™ diesel models can result in as much as $2,500 in savings over the first three years and lead to long-term savings resulting from better fuel economy and lower fuel costs:

Note: Fuel savings can increase by another 20% if off-road diesel is used

Savings from faster job completion times and more billable hours. Diesel models can complete tough mowing jobs faster – up to 50 percent faster in some cases – adding the potential of up to 260 additional billable hours in a normal mowing season. 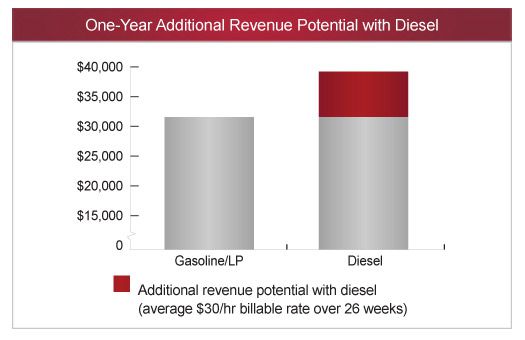 It's not uncommon for a liquid-cooled, 3-cylinder MaxTorque™ diesel engine to provide twice the service life of an air-cooled, V-Twin engine. If the air-cooled model has to be replaced twice as often, factor in the cost of purchasing two air-cooled machines for each Grasshopper diesel model, and the diesel savings are apparent.

Diesel models have no spark plugs or plug wires to replace, and because they use less fuel there is less time spent at the pump. Calculate the savings from the operator spending only half as much time filling the fuel tank – up to 70 fewer trips to the gas station each year!

Beyond the cost of ownership, a Grasshopper MaxTorque™ diesel is a solid long-term investment that lays a foundation for future equipment purchases. A significant advantage of MaxTorque™ diesel models lies in trade-in value. Commercial operators traditionally cycle out air-cooled models at two- to three-year intervals, while the equipment still retains nominal value for less demanding applications. Modified (LP) air-cooled riders, like stand-on mowers, have virtually no after-market value. MaxTorque™ diesel models, on the other hand, double or triple the useful life cycle, allowing the owner to cash in big at trade-in time, or to continue reaping return on investment by keeping the unit in use for more years. Several Grasshopper diesel-powered mowers are still operating with over 10,000 hours on the original engine.

Choosing clean MaxTorque™ diesel power as an alternative fuel to gasoline, LP or CNG can save up to $4,000 in fuel costs and can boost revenue up to $23,400 over three years. With combined fuel savings and revenue potential, you can add more than $800 to the bottom line every month.

When trade-in value is included at the end of three years, the overall return on the original investment in a Grasshopper MaxTorque diesel mower is greater than 250 percent.


Once a transition is made to Grasshopper MaxTorque™ diesel models, it makes little financial sense to use anything else. Financial benefits are realized immediately with reduced fuel costs and a longer service life, and when combined with superior resale value keep replacement costs minimal versus other alternatives.

Clearly, the cost of ownership and operation versus the cost of acquisition is to the advantage of a diesel-powered Grasshopper mower when the scope of the contracts and job sites require hard-working, efficient zero-turn mowers and grounds maintenance systems.