Oasis in the desert


Nowhere is the beauty of the Sonoran Desert better displayed than in Tucson, Ariz., with its giant cacti, Native American influences and rugged mountains. Phil Brewer moved to Tucson in 2000 with his wife, Rhonda, an accomplished artist who creates rope sculptures, life-sized finger-painted Indian figures on sandpaper, ceramics and jewelry. We moved from Hawaii to Tucson, from tropical to desert, from a wet climate to a dry climate, says Brewer. Its a dry heat, but its still hot. When they moved to Tucson, their 3.3-acre plot  Five Oaks  was brown and dry, so they planted 1.5 acres Bulls Eye Bermuda; but it takes lots water to keep grass alive in the desert. They drilled a 1,100-foot well, from which they water once a day in the summer months and less often the rest of the year. Today, Five Oaks is a virtual oasis with green grass, Mesquite trees, giant saguaro cacti, a pond and a waterfall. What we didnt realize when we moved here is that any water causes weeds to grow very quickly, he says. We experienced that after a particularly wet winter this year when we returned home from a four-month road trip showing Rhondas art. Brewer says the weeds were more than three feet tall in places and while the grass chokes out most weeds, they still reached to his knees. He was glad he had his Grasshopper 723K FrontMount, considering the mass of vegetation he found. The mowers 61-inch deck went right through it, and with just one mowing, it looked like Id never been gone, he says. I couldnt have done that with my old mowers. Brewer says zero-turn maneuverability, dual-lever steering, durability, maintenance and the PowerFold® deck lift feature were all key features when he made the decision to switch to Grasshopper. I wanted a deck that would reach under trees. I saw that the FrontMount deck would get under trees or sweep around and under them, he says. It easily maneuvers in and out of tight places. I can finite-mow right down to within one-half inch of where I want to go, and at a fairly good speed. The maneuverability and speed helped reduce his mowing time from three hours to 40 minutes, including removing all the clippings, something he was not able do with his other mowers. The PowerVac Collection System doesnt clog like the old collectors, and I only have to empty it twice. When its full, I just spin around, empty it and I get back to mowing. I dont have to stop until Im done. Brewer also appreciates the mowers comfort features. Its like sitting on an easy chair. Im not bouncing around trying to hold on. However, he is most satisfied with the ease of maintenance. Maintenance is a breeze. The engine is easy to get to, and the oil is easier to change than on my cars, he says. But I absolutely love the PowerFold® feature. It lets me clean under the deck without breaking my back, and thats important to me at my age. At nearly 70 years old, he does not want to waste time and energy mowing or fixing equipment. Id rather do something I enjoy, like travel the country with my wife, he says. 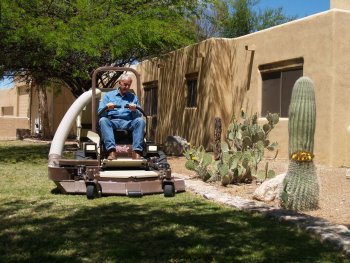 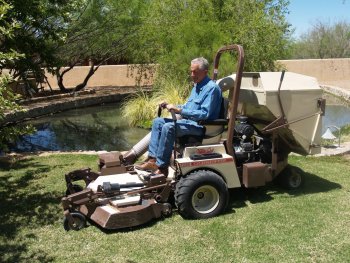 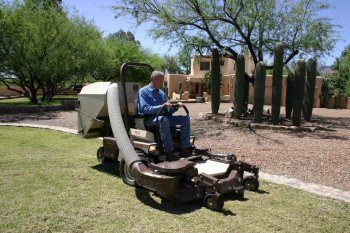