25,000-acre ranch relies on Grasshopper to mow both sides of the fences


For more than a century, the Kempfer family has owned nearly 25,000 acres in central Florida. The land was originally purchased for timber production due to its abundance of cypress and pine trees, but the Kempfers soon discovered that the land would also be suitable for ranching. Now, as a fifth-generation working cattle and horse ranch, Kempfer Cattle Company in Deer Park, Fla., is just one of several operations that call the ranch home. The family still owns and operates a sawmill for timber, but it has also expanded into wholesale sod production, as well as hunting and guide services. The familys Osceola Outfitters is a nationally recognized hunting lodge and game management organization. With multiple family homes and other structures scattered throughout the ranch, the Kempfers rely on Grasshopper to help them maintain their properties in order to focus more time and energy on the familys multiple business interests. Jimmy Kempfer says that not only is their diesel Grasshopper a good, solid piece of equipment, its also lady-friendly, which means that both his mother and his wife are happy to help mow more than 10 acres of lawns and other areas every week or two, year-round, depending on the weather. Its also time-effective, he says. Our old conventional mower just took too long to mow our multiple properties. The Grasshopper is so much faster. Kempfer says that the diesel power of the Model 722D FrontMount is another advantage. Our first Grasshopper was a 614. It was a great mower, but when we needed a new one, we opted for the bigger diesel, since it would have the power to handle the tough conditions we put it through. The larger deck helps them finish faster too. Living in the middle of a working cattle ranch, Kempfer says that mowing on the livestock side of the fences is sometimes necessary in order to control the critter population, as well as keep the livestock from wandering too close to the familys living spaces. The FrontMount deck is especially helpful in reducing trimming time under those same fences. We can get out and knock down that tall grass with no problems, he says. We can cut the seed heads off of Bahia grass with ease  something other mowers just cant do  all without leaving strips youd have to mow back over again. The diesel engine also uses less fuel, and is built for longevity. That mower is going to last for awhile, he says. Furthermore, Kempfer appreciates the quick and friendly service he receives from his local Grasshopper dealer. With the quality craftsmanship, ease of operation and convenience of parts and service, Kempfer is quick to recommend Grasshopper to other ranchers and landowners who face similar day-to-day challenges. You cant waste time in this business, and we dont have to with our Grasshopper. 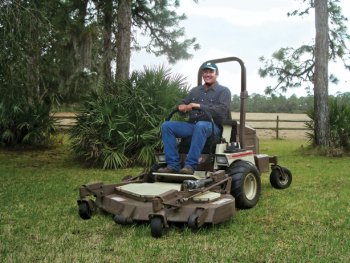