---- UPDATE Jan. 27, 2012: Read a short Q&A with Mike Stewart, Jr., of Stewcare at the Ohio Power Show 2012. ---- Michael "Stew" Stewart, owner of Stewcare in Delaware, Ohio, has been a loyal Grasshopper user for more than 33 years. He was one of the first commercial mowing contractors to use Grasshoppers in central Ohio in the late 1970s. "Grasshoppers are pretty popular around here now, so we don't stand out as much as we used to," Stew says. But Stewcare does stand out and continues to lead the landscaping marketing in Delaware County. "We have the best contracts and the best properties to maintain because our work is the best in the area, and it's all because of the Grasshoppers," Stew says. Mike Stewart, Jr., Stew's son, agrees, saying that the look of the finished job really sets Stewcare apart. "The average person sees a neat-looking job, but our customers - the ones who know what they're looking at - know it's our clean lines that make us who we are," he says.

The company's client base is extremely diverse including school districts, athletic fields, cemeteries, and commercial and residential properties, to which they offer services year-round, from mowing to fertilization to snow removal. Many of the clients they serve have been extremely loyal, which Stew says is part of Stewcare's reputation. "We have very little customer turnover," he says. "For example, we've had Ohio Wesleyan University since 1983." At one time, Stewcare had 18 employees and more than 100 accounts, but recently, Stew and Mike Jr., who is now the company's president, have taken steps to make the company more efficient and profitable, which includes the transition of leadership from father to son. Now, Stewcare employs Stew, Mike Jr., a crew foreman and four full-time cutters. The new plan also reduced the number of accounts, focusing more on larger commercial properties than smaller individual residences. "We have about a three-to-one mix of commercial-to-residential customers," says Stew, "and we're really known for our work on athletic fields. We're very proud of the neat, wide stripes we deliver with our Grasshoppers. They look fantastic." Every job gets the same treatment, whether the first in the morning or the last in the evening. Stewcare can command that level of perfection because the mowers are comfortable, which helps the crews stay alert and focused throughout the day. "The Grasshoppers help us get the job done fast, right and on time," he says. "I have to say, the view from my office is the best in town." In addition to comfort, peak performance of the mowers is essential, so Stewcare employs a "pre-flighting" maintenance program, a technique Stew learned in the service during the Vietnam War. The crew comes in early every morning to check every piece of equipment, bumper to bumper. "We don't have many maintenance issues with our six Grasshoppers because of pre-flighting, but also because they are built like tanks," Stew says. "The diesel engines are tough, powerful, they don't slow down for anything. Plus they consume half the fuel as gas mowers, which helps us control our costs." Stewcare is also able to keep the Grasshoppers in top shape by carefully selecting the properties they serve. "Because of the reputation, we can be picky," Mike Jr. says. "So if we can't do the job efficiently without beating up our machines, we won't take on a new job," Stew says that while anyone can cut grass, that doesn't mean they do it well; they must have an eye for the lay of a property and its potential. "Part of it is the operator, but mostly, it's the machine," he says. "If you have bad equipment, you'll get bad results. But the Grasshoppers are perfection. They sell us; we just drive them." On several occasions, dealers have asked Stewcare to demo new products, but both Stew and Mike Jr. says nothing is as productive and efficient for them as their Grasshoppers, and neither can imagine switching to anything else. "Dad has built this business with Grasshopper, and it's going strong with Grasshopper," says Mike Jr. "I hope to pass this business along to my children, and I can't see a future for us without Grasshopper." 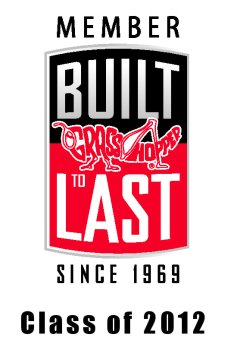 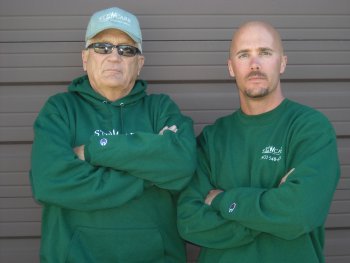 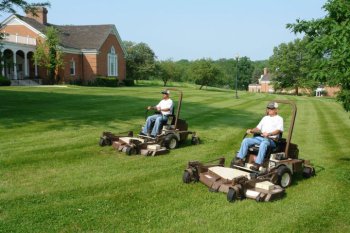