Having the fastest mower doesn't necessarily mean you can mow the fastest...


It seems logical: An engine with less horsepower will not perform as well as an engine with more horsepower. Thats exactly what Keith Mayo, owner of City Wide Recycling in Paducah, Ky., thought when he first heard that a 25-horsepower diesel mower would outperform a 33-horsepower gasoline mower. I just didnt believe it. Id tried a 25-horse gas engine with a 72-inch deck several years before, and man, it just wouldnt do the job. But that was the crucial difference - gasoline versus diesel - a difference Mayo experienced first-hand when he took a Grasshopper MidMount 325D MaxTorque diesel mower with a 72-inch 4X Rear Discharge deckout for a demo. After that, I just couldnt believe how fast I could mow. The combination of the diesel and the rear dischargeits just a beast. When Mayo first got into the mowing business, he was attracted to the promises of fast mowing that other mower brands tout. He was a true believer that the fastest mower wins the race. Speed is part of the equation. Time is money in this business, he says. But ground speed doesnt do you any good if you tear up the yard, or you fly off and hurt yourself. Mayo says the key is mowing fast, not just having the fastest mower. It might sound like a redneck thing to do, but me and some of the other landscapers in town race mowers sometimes. And I might get beat on the blacktop, but when we get on the grass, man, I just mow circles around the other guys. Mayo says that he can put one of his faster mowers up against one of his Grasshoppers, and while mowing at a good steady pace, trying to get the best cut quality possible, the Grasshoppers outperform anything else he has or has tried. Its really amazing, especially with the rear discharge. All the clippings come out behind you, so youre not mowing back over them and bogging the mower down. So, I really can mow faster with my Grasshoppers than with anything else. Mayo has three 325D mowers, all with rear discharge decks. Those decks help with one of his accounts, the local school district with more than 200 acres of turf area to mow, which has stretched the mowing cycle out to every other week due to budget constraints. We can mow through two-week grass like its one-week grass, he says. The rear discharge decks really make it easier to get a good looking cut even if you can only mow every two weeks. And then we can go mow a residential yard with the same decks and get the same cut quality. Its really impressive. Whats also impressive, he says, is the fuel economy he gets with the diesel engines. After a full day of mowing, usually about eight hours, Mayo only uses three gallons of diesel, compared to six gallons of gasoline. Its cut our fuel costs in half, which is another thing I didnt think was true at first, he says. Weve been able to actually increase our margins, even in a time when revenues are shrinking. Mayo says in this economy you have to be smarter than the competition, not just cheaper. Mowing cheaper wont get you anywhere if youre not reducing costs. He says competition is cut-throat tough right now, and he is seeing people who have lost their jobs going and buying a mower and cutting grass, and theyre doing it cheap. Its made me sharper. You have to adjust, and our adjustment was switching to diesel, he says. Were mowing cheaper than weve ever mowed, but reducing our fuel costs and mowing faster has helped us keep the same amount in our pockets. Mayo says its just a matter of time before he replaces his entire mowing fleet with the faster, more fuel-efficient Grasshopper diesels with rear discharge decks. Its about getting the best bang for my buck  the best price, the best quality, the best cut. And for me, it doesnt get any better than Grasshopper. 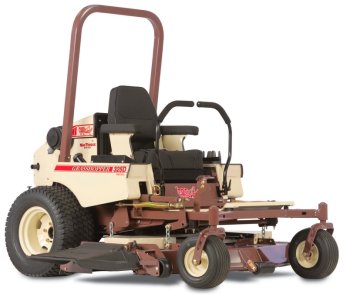