High up in the Rockies, getting the most out of a piece of maintenance equipment is a necessity, according to Vance S. Garfield, parks and recreation supervisor for Kaysville City, Utah. Not only is every seasons weather more extreme in the upper altitudes, but just like other cities, our budgets arent getting any bigger, says Garfield. Thats why we have to make the best of what we have. Most of the citys 148 acres of mowing  which includes a park, a cemetery and several public lawns and properties  requires tight turns, reaching into tight spaces and cutting close to playground equipment, shrubbery, flower beds, trees and fences. Garfield says that they couldnt do it all in the time they have without their Grasshoppers. The Kaysville Parks Department began using Grasshopper in 1990, and now operates eight FrontMount mowers  three 725 models and five 729T models  for mowing, leaf mulching and collection, and snow removal. The department also has several implements: a dozer blade, a snowthrower, a rotary broom, a turbine blower, an AERA-vator and a PowerVac Collection System. The 729T models are also equipped with dedicated rear-discharge mowing decks. These machines have ample power to handle a variety of situations from relatively tall grass to large snowdrifts, says Garfield. Cole Stephens, parks manager for Kaysville, says that the rear-discharge decks have been a great addition to their maintenance equipment line up. Were able to control our discharge patterns better, which reduces the amount of time to blow curbs and sidewalks after we mow, he says. It also helps keep the debris off the stones and monuments in the cemetery. In addition to helping the department keep up with mowing in the spring and throughout the summer, the Grasshopper implements and maneuverability are also very important in the fall and winter seasons. The AERA-vator is indispensable when we aerate the cemetery, Stephens says. It used to take one crew member with a walk-behind one week to aerate all 21 acres. Now, it only takes two or three days with the Grasshopper. The turbine blower and PowerVac also make leaf removal more efficient, as the turbine blower has replaced traditional backpack blowers. We have lots of trees and fences to work around, and where it would take two people all day to clear leaves in the park, it only takes one person with the turbine blower half a day, says Stephens. Garfield says the mowers zero-turn capabilities are as essential to snow removal during the winter as plows are for the citys trucks. We have several areas we take care of that simply cant be reached with the big equipment, says Garfield. The entire two-block center of the city surrounding our city offices is honeycombed with walkways and sidewalks. The Grasshoppers and snowthrowers are ideal for that kind of job, he says, since the Grasshoppers are fast and agile, able to clear any amount of snow and throw it exactly where the operators need to put it. I cant imagine how long it would take with manual shoveling or walk-behind snow removal equipment. Even when the snow is more than a foot deep, the snowthrowers are capable of handling the volume. Garfield says they set the snowthrowers high and make a couple of passes. There is no depth these machines cant handle if we either go slow the first pass, or just set it high for the first pass and then repeat at a lower setting, he says. Garfields crew is also responsible for keeping the city-owned cemetery clear of snow, which is especially important since snow tends to stay longer periods of time into the spring. Lingering snow can often be found on the ground well through Memorial Day. When a funeral is scheduled, the snow has to be cleared in that spot, he says. If the snow cant be blown off with the turbine blower, we use the snowthrowers because they dont scalp the grass. Plus, the maneuverability makes removing snow around traditional monuments quick and efficient. With all the benefits Grasshopper delivers to Kaysville City throughout the year, its no surprise that Stephens says the city will continue to use Grasshopper well into the future. Grasshopper has helped us reduce our equipment and labor costs, so weve been able to do more with less, he says. Our Grasshoppers are some of our greatest assets, allowing us to keep our standards high and our costs low. 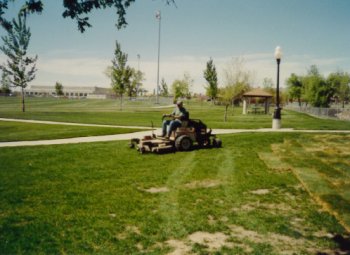 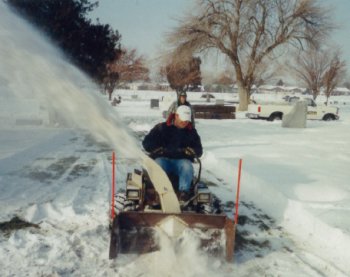