In Hollywood, theres no business like show business. For Mike Flaherty, owner of Lawnscape in Montclair, Calif., there is no business like aeration business. He is passionate about his work and it is reflected in the quality of the turf areas Lawnscape maintains in Los Angeles County, from public properties to high-profile estates in Beverly Hills. His client list includes Oscar winners and world-renowned fashion designers among other prominent Hollywood figures. A spraying and aeration company, Lawnscape specializes in keeping lawns well-fertilized and weed-free using a Grasshopper Model 620T power unit with an AERA-vator. Lawnscapes contracts approximately 1,000 jobs each year, mostly during the spring and summer months, including Disney headquarters and Hollywood residences. "Soil needs to be loose for grass to grow, so aeration is necessary, especially in California where there's not much top soil," Flaherty says. "You might have about one inch, if you're lucky. Aerating is critical in this region." Aeration increases the permeability of the soil, assures good absorption and increases root access to amendment applications. Irrigated properties benefit from regular aeration by improving water usage and customers especially like for Flaherty to aerate in August to save water. Many of my clients could do the work themselves, but they rely on us to catch it right on time, he says. We schedule regular applications every six weeks or so to keep the lawns healthy and looking good. The common denominator is the desire for a lush green lawn and the well-known ability of Lawnscape to provide it with the help of the Grasshopper and AERA-vator system, which Flaherty says is the best suited system for his work. When he started with Lawnscape in the 1990s, Flaherty would rent a tractor and pull-behind aerator, but he had to make $2,000 per day to cover equipment expense and maintain his margin. The tractors were also heavy on the fields, and it took an hour to unload to begin the work and load them again afterward. Flaherty then tried using walk-behind aerators. He could aerate a football field in 4 hours using 2 walk-behinds, but the cores left behind were not acceptable, taking weeks to disintegrate as irrigation and mowing broke them down. Cores arent so much of an issue in the off-season when the fields are not being use, but they do not allow for aeration during the playing season. Now, with his Grasshopper and AERA-vator, Flaherty has solved the problems presented by pull- and walk-behind aerators. Instead of taking 8 man-hours between 2 people with walk-behinds, Flaherty can now aerate an entire field by himself in just 3 hours, which is a staggering 63 percent reduction in labor. The maneuverability of the Grasshopper and the 40-inch AERA-vator also allows easy access to school grounds through 48-inch pedestrian gates. The Grasshopper and AERA-vator also much lighter on turf and dont leave behind cores. We are able to condition the turf efficiently, he says. It's also great for breaking up ground for planting beds. Flaherty says he can finish a field in three hours by himself and the field can be aerated whenever it's needed, even during the playing season. One of the techniques he's learned is that he can easily vary his speed to adjust the depth of the oscillating, solid tines, going slower so the tines can dig deeper in very tight conditions. Combined with Grasshopper maneuverability and ease-of-operation, the AERA-vator simplifies the aerating process and streamlines his business. As a result, Flaherty has been able to reduce his costs and his fees without losing his margin. Its just a winning combination for everyone, he says. 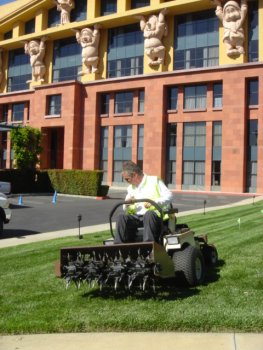