Trees arent just a hobby for John Fisher; they have been a way of life at Fisher Christmas Trees for 25 years. Of the five acres Fisher calls home in Marseilles, Ill., three-and-a-half are dedicated to the tree farm. On average, it takes about 10 years from planting for a tree to reach market maturity, and each year he sells about 150 trees. At one time, he estimates he had 3,500 trees  nearly 1,000 per acre  growing on the farm. Thats a lot of trees to care for, he says. And mow around. The 10-foot Scotch Pines can grow to approximately six feet across and are planted six feet apart, in straight rows and diagonally. That doesnt leave a lot of room to mow around them, says Fisher. But its not been a problem since I bought my Grasshopper. His 616 FrontMount with a 48-inch cutting deck makes quick work of the job. He says it has cut his mowing time by more than one-third. I used to take me eight hours or more with my old Cub Cadet. It didnt have a very good cut, and it didnt maneuver very well. Not so with the Grasshopper, he says. The overall length of the mower is eight feet, but it maneuvers through the tree rows with ease, trimming around and under the trees as it goes. The out-front deck and zero-turn radius are my favorite features. Its just a perfect combination. Fisher says that during spring rainy season, he has to keep up with the mowing on the farm about once a week, but throughout the summer months when the rainfall decreases, he only mows the rows once every three weeks, giving him more time to tend to the trees themselves. Ill mow one pass down a row, and then down the next, leaving a little strip on the other side, he says. The next time I mow, I go down the overgrown side, and the Grasshopper takes care of the tall stuff so easily. Switching from one side to the other each time is an efficient time saver in the off-season. To prepare for the busy Christmas season, Fisher will mow once down the diagonal rows as well after the first frost in early October, making sure that the grass is knocked down enough to make it easier for the hundreds of customers that will meander their way among the trees between Thanksgiving and Christmas. The out-front deck also detaches and interchanges with a dozer blade for clearing snow from my 100-foot driveway, as well as two of my neighbors drives. Another feature that Fisher likes about the Grasshopper is its comfortable seat and smooth ride. From time to time, I do experience some lower back pain but Ive found it is comfortable enough that I can mow without any painful discomfort. Even though he loves the tree business, he only has five or six years of marketable trees left; he plans to phase out the business in those remaining years. At that time, Ill be past 70-years-old. Its hard work. I enjoy it, but it takes its toll. But even after the trees and the customers are long gone, he will still have five acres to mow. I dont see giving up my Grasshopper anytime soon, thought, he says. Thats for sure. 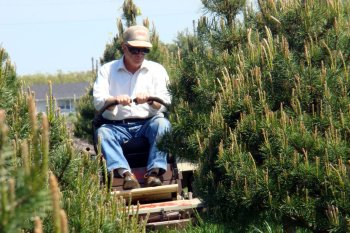 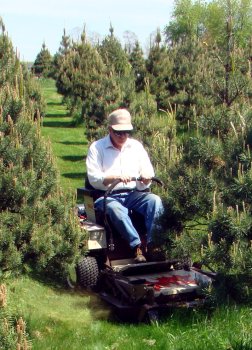