Perhaps it's only coincidence that the president of Friends University in Wichita, Kan. is named Green. But it certainly is fitting considering Dr. Biff Green's commitment to a lush, manicured, welcoming campus at the school, the largest, independent institution of higher learning in Kansas. Tasked with maintaining this oasis in the middle of the hot, dry Wichita summers is Friends director of landscaping, Mark Furry. The 40-acre campus requires a weekly regimen for three members of his crew who spend six hours a day for three days mowing and manicuring the turf. Friends keeps a fleet of five 700 series FrontMount™ mowers, choosing Grasshopper for its quality cut, maneuverability, operator comfort and low maintenance. The 61- and 72-inch mowing decks allow the crew to stripe the lawns beautifully, creating a particularly striking effect when viewed from the upper floors of the historic Davis Administration Building. Furry says the crew, which mulches clippings, alters its mowing patterns 45 degrees with each mowing, leaving a nice pattern in the grass. The Grasshopper mowers allow easy maneuverability around the many trees and obstacles and help speed completion of the mowing job. The out-front mowing deck provides access under low pine trees that dot the campus. To keep the campus looking green, even in the heat, regular irrigation is necessary, but Friends fleet of Grasshopper mowers have a light footprint that Furry says enable them to mow soggier ground than other machines their size, without tearing up the lawn. Furry says he has used other mowing equipment through the years, but likes the smooth ride and comfort of the Grasshoppers that allow his crew "to be on that long without getting worn out and beat up. His original decision to purchase the mowers was based partially on that comfort. At the time, Friends was using a mower brand that Furry says "just killed you to ride it." Furry's fleet is used on fescue turf throughout most of the campus and also on the Bermuda turf the university's athletic practice fields. And throughout the 13 mowing seasons at Friends during which Furry has used Grasshopper mowers, the equipment has provided consistent reliability and always been ready when needed. And because Kansas is famous for seasons ranging to both ends of the spectrum, Furry and his crew employ the zero-turn maneuverability to handle not only the green stuff but - with dozer blades - to help remove the couple of snowfalls that blanket the campus sidewalks and parking lots in an average winter. The commitment to the lush, manicured campus has been noticed. Furry says numerous people, many who regularly travel to college campuses, have told him that Friends University has the nicest looking campus in the Midwest, hands down. The attention to detail has, no doubt, also played a role in the decision of prospective students. As one student told Friends president Green, "I knew if someone was taking good care of the campus, they'd take good care of me." 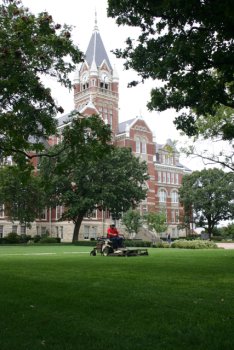 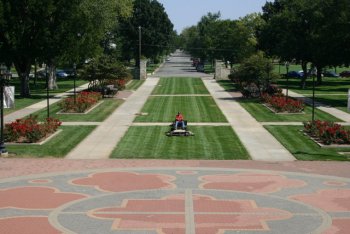 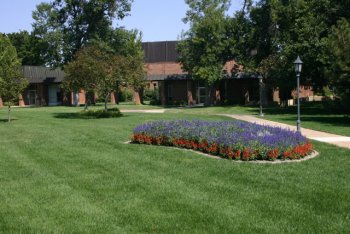