Every year in September, the Kansas State Fairgrounds in Hutchinson, Kan. are bustling with activity. As visitors take in all the sights and sounds of Kansas largest gathering, Keith Schroeder  physical plant manager for the fairgrounds  is too busy to notice. With more than 280 acres, the fairgrounds require a lot of attention from Schroeder and his employees and volunteers. From April to September, everyone is working at least eight hours day, he says. And its not uncommon to be working much longer than that. He says that even though the team might work long hours, the work is easier with the two Grasshopper 722D FrontMount mowers they use. For the past three years, Grasshopper has been an official sponsor of the Kansas State Fair, says Schroeder. We absolutely love using Grasshopper mowers. One reason Schroeder is pleased to use Grasshopper is that the mowers are dependable. The two machines will run at least eight hours daily for six months  more than 1,000 hours on each machine  with little maintenance. Regardless of the brand, when you get new machines, you never know if youll get a lemon, he says. But [Grasshoppers] are built so well, we really havent had major maintenance issues with them; just tightening nuts and bolts here and there. With Grasshopper, Schroeder avoids downtime due to major drive train and mechanical problems, as well as frustration due to lost productivity. As a result, his staff is able to stay on top of the fairgrounds large acreage. Even though some spaces of the grounds require additional stand-alone equipment, Schroeder says the flexibility of the Grasshoppers helps keep the use of other equipment to a minimum. You can go straight from a campground or parking lot to a front lawn, and youll get a great finish every time, he says. You wouldnt be able to do that with other machines comparable in size. Wed need more push mowers for the lawns without the Grasshoppers. That flexibility also extends to turf renovation and aeration. Each year, the FrontMount decks are exchanged for AERA-vators to help prep the grounds for over-seeding in the spring. The AERA-vator really helps us rejuvenate the grounds after the Fair in early September, Schroeder says. Since the physical plant staff is able to run the machines every day, they are able to turn over the mowing every two weeks and maintain the manicured appearance Schroeder expects. Because of the year-round attention we pay to our grounds, we receive comments every year on how nice the open spaces and lawns look, he says. Our visitors are always impressed with the aesthetic appeal of the grounds. In addition to flexibility, performance is another reason Schroeder prefers Grasshopper. The performance is impressive. The diesel engines are powerful and dependable. We wouldnt be able to mow all the ground in two weeks if it werent for that, he says. Schroeder also credits Grasshoppers package of power, performance, durability and flexibility for the retention of employees. One employee, specifically, he says. I know for a fact that the Grasshoppers have helped keep him around, simply because there isnt as much frustration  downtime, maintenance, usability  as there is with other machines. Overall, Schroeder is pleased with the arrangement between the Kansas State Fair and Grasshopper, and hopes that it continues for many years to come. Grasshopper is on top of its industry and its product, he says. They deliver a quality mower with great performance year after year. As far as Im concerned, there is no other machine I would trust to do the job. 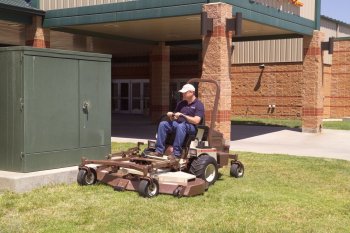