The Bermuda grasses of central Arkansas grow relentlessly in the summer months. The grasses fast-growing naturenot to mention its thick tangle of runners and bladesmake regular maintenance a challenge for any landscaper. Just ask Charles Rainey, owner and sole operator of Norex, a landscaping and visual enhancement company in Conway, Ark. The Bermuda down here grows and spreads extremely fast, says Rainey. Its hard to stay on top of the mowing, and its harder to do if your equipment isnt cut out for the job. Thats why Rainey, as an individual landscaper, looks to Grasshopper for the best mowing equipment to get the job done right the first time, and in a timely fashion. Operating a 725K2 FrontMount Grasshopper mower, Rainey tends roughly 25 acresmostly residential propertieseach week during the mowing season, which for Rainey lasts from mid-March through November. But he only spends approximately 15 hours a week on his Grasshopper, which he credits to the machines performance and maneuverability. Ive used several other machines, but I would spend hours and hours on each job, Rainey says. They would always get bogged down in the grass and thatch, and their maneuverability was poor. But I can mow right through the top 1-½ inches of thick Bermuda without a second thought on the Grasshopper. For the past three years, Raineys Grasshopper has been influential in trimming mowing time and allowing Rainey to branch out and diversify his landscaping services. It takes me two days to complete jobs that used to eat up my entire week, says Rainey. He uses the remaining days to do more landscaping jobsjobs he would not have been able to take otherwise. As a result of the increased productivity, Rainey has tripled his mowing and landscaping income in three years, results that he credits to his Grasshoppers outstanding performance and handling. The first year, he increased his bottom line by $3,700, all mowing, says David Washburn, president of Davids Small Engine, Inc. in Conway, who sold Rainey his first Grasshopper. The second year, it increased $6,800. You have to find a niche, Rainey says. You have to do something better than the other guybig or smallto retain your customers and earn new business, and he says hes found it in his Grasshopper. Rainey provides a cleaner cut with less yard waste, a finished product he couldnt accomplish without his Grasshopper. The PowerVac Collection System allows him to collect all the waste and clippings, which he then removes and uses as compost. The previous mowers didnt do that great of a job of waste collection, he says, but the Grasshoppers cut is precise and clean. And because of that, Rainey has picked up new business from his clients neighbors asking who cuts their lawns. I get more new business from those referrals than anywhere else, he says. Another benefit of the Grasshopper that allows Rainey to provide better service to his clients is that the machine does not leave large ruts in the grass, even after hard rains. Im practically the only guy out on the job the day after a hard rain. The Grasshopper has great weight distribution and a softer footprint, so I dont have to worry about leaving ugly tracks and ruts, he says. I dont have much down-time with the Grasshopper due to weather; wet Bermuda doesnt even bog it down. Not that he really needs the down-time. Rainey praises the Grasshoppers handling and comfort, features that make mowing easier and more enjoyable. With his other machines, he would take frequent rest breaks, but due to the Grasshoppers ergonomics, he does not fatigue as quickly. Anymore, if I want to take a break, Ill just grab a drink, sit back down in the seat and relax, he says. The comfort and smooth ride make the job so much more enjoyable. And because of the Grasshoppers comfort, he is able to spend more time mowing and less time resting, increasing productivity. Productivity is of utmost importance to Rainey, and that means that his equipment must be reliable. He cannot afford extended down-time for repairs, but Rainey says that hes never had that problem with the Grasshopper. He can jump on the machine any day at any time, and it will run like it did the first day I got it. As a solo operation, Rainey says that switching to Grasshopper was the best business decision he has made. Hell even stop guys who are mowing with other machines and offer to let them test his Grasshopper, says Washburn. Hes one of our greatest cheerleaders for Grasshopper. Due to the durability, reliability, comfort and powerful performance of his Grasshopper, Rainey has been able to expand his business without the expenses of more equipment and additional employees. He gets more bang for his buck with the Grasshopper, which has allowed for quick business growth. However, as Rainey knows all too well, the Bermuda grows quickly, too. 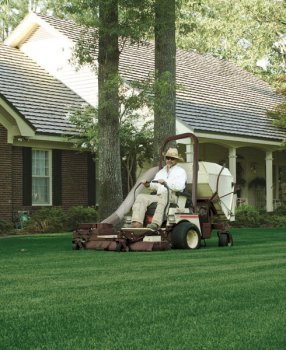