I worked it all up, and it turned out to be a pretty good savings. Thats what Wes Sumpter, grounds manager at the Stephenville Independent School District in Stephenville, Texas, says about the new Prolawn Sprayer the district recently purchased for their fleet of Grasshopper mowers. We used to spend more than $8,500 on dry granule fertilizers every year. Now, we only spend $7,000 in liquid fertilizers, so were saving $1,500 a year, he says. With six campuses, one administration building, six sports fields and one band practice field spread over 50 acres, Sumpter and his grounds crews dont have time to waste. Not all of that area requires mowing, but all of it does require maintenance. The fields range in size from 64,000 to 175,000 square feet, and they are spraying all the fields and the lawn areas year-round for pre-emergent, post-emergent and broadleaf weed control. The new sprayer not only saves on material costs, but on labor, too, he says. It used to take two or three guys working about two or three hours per application. Now it takes just one guy about an hour. Sumpter says the efficiency of the Grasshopper and sprayer goes beyond saving man-hours. The team would use a Ranger with a pull-behind spreader and a pick-up truck to haul fertilizer around the fields. They would have to refill the spreader four or five times per field, but now they only have to refill the sprayer tank once for each field. In addition to the Grasshopper outfitted with the sprayer, Stephenville ISD has nine other Grasshoppers  all diesel FrontMount mowers, six of which see continuous mowing action throughout the mowing season. They also use an AERA-vator turf aerator and a debris-mowing Turbine Blower for the Grasshoppers to perform aeration and debris removal tasks. We have three mowers that are dedicated units, one for each of the implements, since were using them on a regular basis, Sumpter says. We also have two spare mower decks, so if we do get behind on mowing, its easy enough to take off the attachments and reattach the decks, and off you go. Sumpter says that like the sprayer, the Turbine Blower has helped reduce the time and labor it takes to clear debris from parking lots, especially at the high school, which has the largest parking lot in the district. It used to take six or more hours for a team of four guys to clear the parking lot with backpack and hand-held blowers, says Sumpter. Now, one guy on the Grasshopper with the Turbine Blower can clear the whole parking lot in one hour. The same goes for the AERA-vator. Once the ground temperature reaches 56 °F, they aerate each field once a month to keep the turf healthy. It takes about 45 minutes to aerate one field, going slowly to fracture the ground the best they can, he says. Before, we were using a tractor with a pull-behind aerator, but the tractor was heavy and would leave ruts in the fields, Sumpter says. The AERA-vator has a lighter footprint with the weight distributed more evenly between the attachment and the mower, so it doesnt leave ruts. Sumpter says that their Grasshoppers have been great investments and that they have not had one lick of trouble with the diesel engines, the hydrostatic drives or any other part. We get great fuel economy with the diesel mowers, compared to gas models weve used. We fill up in the morning and can mow all day without refueling, or even burning up all the fuel in the tank, he says. All of our guys like the Grasshoppers, and we dont intend to stop using them, especially since we continue to save time and money with them. 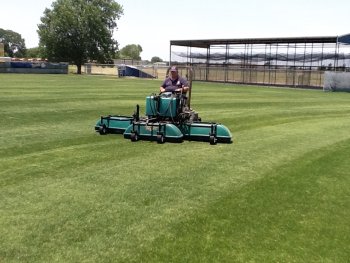 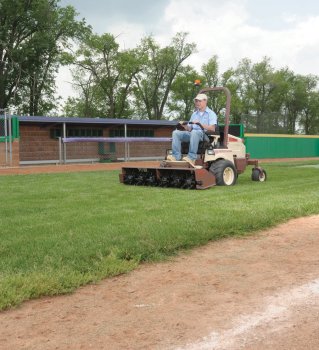 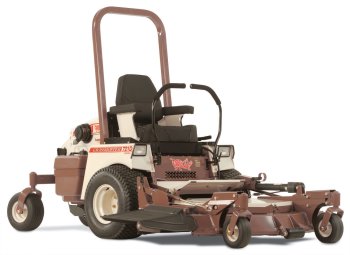