According to Franklin Teeter, owner of Snake Hill Nursery in Pomona Park, Fla., investing in the right equipment  regardless of the cost  is one of the best business decisions an owner can make. To illustrate his point, Teeter likes to tell a story about his days picking oranges by hand on the northern edge of Floridas citrus belt. The old man that ran the place told us one day that he would pay one million dollars to buy a machine to replace one worker, Teeter says. We thought he was crazy, but he explained that the machine doesnt call in sick, doesnt have the Monday or Friday blues, doesnt complain, doesnt need to be paid. So, if one employee can do the work of two or three, youre money ahead. Now, Teeter -- a business owner himself -- applies that lesson he learned so many years ago to his landscape maintenance company. I started using a walk-behind mower; I had one employee, and he did the string trimming, he says. It would take 48 hours a week to mow everything, thats all we did, and I was usually waiting on my helper to finish after every job, so I did the cleanup work. But when Teeter decided that he couldnt keep up with the physical demands of the walk-behind, he bought a brand new 928D FrontMount diesel Grasshopper. The next week, and this is no lie, we mowed everything in 17-and-a-half hours. We cut our mowing time by almost two-thirds, says Teeter. And, I was able to do more trimming with the out-front mower deck that my helper was done with the string trimming before I was done with the mowing. As a result, Teeter was able to pick up more accounts, but keep his pricing steady, even in a more competitive landscaping market than ever. My competitors just couldnt figure it out. They still cant, how I can have this expensive equipment and not charge an arm and a leg, he says. Teeter says its the equipment that makes all the difference. Hes more productive, he has more energy to take on more accounts and add services, he has more time to build relationships and rapport with clients. Most of his clients are residential accounts, many of which have stayed with him for more than 20 years. We do everything on a property, from mowing to installation to pools to tree work, and if I cant do it, I find someone who can, says Teeter. I make sure that my clients are taken care of, thats why many of my accounts  even if the home sells and changes owners  stick with me. Another reason his equipment is a game-changer is that its durable, maintenance-free and low-cost to maintain. I got just shy of 14,000 hours out of my first Grasshopper. Over the 12 years I ran it, that averages out to less than $1 per hour to use it. It paid for itself and more in that time, Teeter says. That and it was diesel, which has more power and lasts longer. Plus Im burning less fuel. I can mow a continuous nine hours or more and not refuel once. In addition, Teeter uses off-road diesel, which is road-tax free and cheaper than gasoline. The result is better fuel economy and dramatically lower fuel costs. Teeter says he does not understand why more contractors are not buying diesel mowers with out-front decks, but not just any mower: Grasshoppers. When guys ask me how I can afford to have this equipment, I tell them that I cant afford not to, he says. Even though its more money up front, with the amount of fuel you save and the greater productivity to can it, it just amazes me that guys dont make the switch. Now, Teeter is passing his wisdom down to the next generation. His son asked the same question one day, why he doesnt raise his prices now that he has an expensive piece of equipment. I told him I do that for a reason. I got the same amount of money for the 20 minutes as it used to take for an hour. I can go do two more accounts in the time it took me to do one," he says. "And not only am I saving costs, but Im making more. Im money ahead and then some, and its all because I invest in the best equipment for the job. 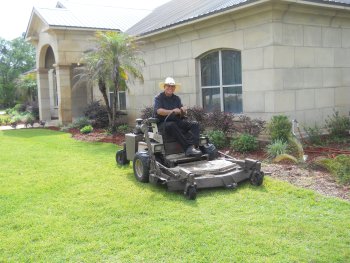 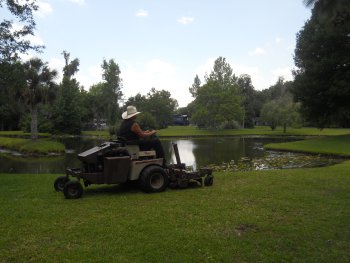