"My Grasshopper gave me my life back"


Brian Schoenthaler had admired Grasshopper mowers for years, but figured they were out of his league. Still, after spending 23 years mowing his five-acre suburban lawn near Wichita, Kan. on garden tractors, he knew it was time for an upgrade. Once he began researching his options, time after time, the right answer was Grasshopper. The right machine for the job A neighbor let me try out his zero-turn mower and it seemed pretty great, Schoenthaler says. I really considered a less expensive, more strictly homeowner-oriented machine like that. Then I realized how much time and money he was putting into maintenance. Heck, one of my priorities was to save time, not just spend it working on the mower instead of the yard. Calling on his local Grasshopper dealer, Schoenthaler was able to test-drive a Grasshopper, and he was hooked. I knew I wanted a 61-inch cutting deck, so from there, it was just a matter of selecting the right model for what I had to mow. Two seasons later, Schoenthaler claims that his Grasshopper 226V MidMount zero-turn mower has given him back his life. Now, I can choose how to spend more of my spare time, he says. Instead of spending seven to seven-and-a-half hours on my old garden tractor, and another couple of hours with the walk-behind mower and string trimmer, I can be finished with all of it in two-and-a-half to three hours. Its amazing how much difference there truly is between my old 38-inch deck and the 61-inch deck on my Grasshopper  not to mention going from a high speed of 5 miles per hour up to 9 miles per hour. Now my neighbors are trying to copy me Schoenthaler was familiar with Grasshoppers reliability and dependability. He was aware of the machines durability and had long admired the clean-cut appearance of grounds tended by Grasshoppers. The ability of the 226V to give him a precision cut  even in deep, heavy grass  was an unexpected bonus. Its been wetter than usual lately, says Schoenthaler. But because my Grasshopper can handle the deep, heavy stuff, I can go ahead and mow. Before, I would have to wait until the yard dried back out, and by then, it was looking pretty messy. His lawn is now anything but messy. Schoenthaler says the crisp, clean cut has given him the freedom to work in patterns, for a truly professional final product. Now some of my neighbors are beginning to copy that, he says. But in my opinion, they fall short in the finished product. I even think our lawn is less weedy now. Fewer weeds promotes the growth of healthy grass, he says. So, although Kansas is notoriously dry in late summer and early fall, I dont fertilize, or even water. Grasshopper affords homeowners many economies Schoenthaler says that he has discovered many unexpected dividends in using a Grasshopper. Cleaner mulching is one. The 226Vs side-discharge feature lets me just keep on going. My old garden tractor would get so bogged down, Id have to stop and clear the blades, and the finished yard would show clumps of undistributed clippings. That not only looked sloppy, the Kansas heat would virtually cook those clumps and severely damage the grass underneath them. Even though he did his homework before making his purchase, Schoenthaler has been pleasantly surprised by the economies his Grasshopper affords. Besides saving me time, the 226 is incredibly fuel-efficient he says. With gas prices in the stratosphere, thats huge. And as long as you maintain the right fluid levels, and keep the blades clean, your maintenance is going to consist primarily of keeping your blades sharp  I get mine done about every 25 to 40 hours. Thats maybe once every 15 mows, or four months. So I may go all season and only need to sharpen the blades a couple of times. And because it has cut down on my need to trim, I save on fuel and maintenance for my string trimmer and push mower  neither of which gets much use anymore. But the biggest thing Grasshopper has given me is leisure time, Schoenthaler says. Before, my lawn maintenance was an all-day deal, now I can whip it out in two or three hours and have the rest of the weekend to spend with my family. I enjoy being outdoors and love the smell of freshly cut grass, he says. Its just that now I can take pleasure in those things from my deck! Durability, reliability, dependability. Grasshopper is still the right answer for me. 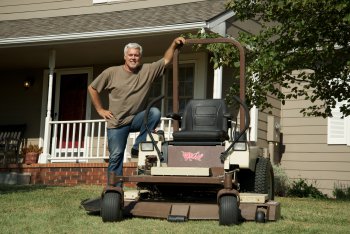 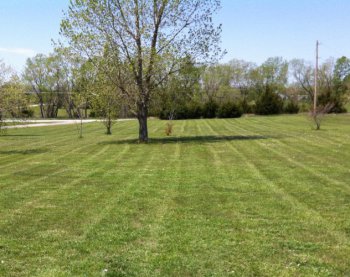 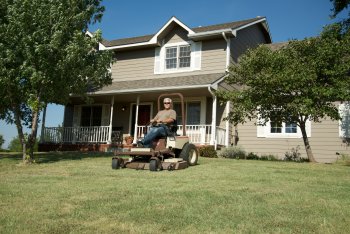