During the cold winter months in Michigan, there isnt much to do outside, unless you play hockey. Pond hockey is somewhat of a regional pastime in the Upper Midwest, and there is no shortage of backyard and common area rinks to strike up an impromptu game. Pond hockey tournaments are a relatively new development, says Pete Read, director of the Michigan Pond Hockey Classic, an annual pond hockey tournament in Whitmore Lake, Mich. The tournaments have only been around for 10 years, at best. Pond hockey keeps most of the basic rules and regulations of official National Hockey League events, but has a more casual approach to the game. At the Michigan Pond Hockey Classic, we have players come from all over the region, the nation and even Canada to play, he says. We just group teams together in divisions for the tournament. The 2011 tournament will be the fourth consecutive year for the MPHC, and Read expects between 70 to 80 teams to compete with more than 500 family, friends and spectators to gather for the games. Its quite the effort for me and my two staffers, but its all worth it, says Read. Last year, we were able to donate all the tournament proceeds to the Karmanos Cancer Center in Detroit. While the tournament has gained in popularity over its three-year stint  up from 58 teams in the 2008 inaugural event  Read admits that holding a pond hockey tournament in southeast Michigan can be a challenge. We arent a cold spot, so ice thickness can be an issue, he says. This is especially critical when we are building the rinks. The ice might only be six inches thick in spots, so you cant get trucks or other big equipment out there. Thats where Grasshopper mowers equipped with dozer blades and rotary brooms come into play. The Grasshoppers are just great tools, he says. Theyre light-weight, which means we dont have to worry about ice thickness. And theyre maneuverable and fast. Theyre just the whip. The rinks are built using existing snow on the ice as boundaries. The snow is moved with Grasshopper mowers equipped with dozer blades to build three rows of five rinks that are 75 feet wide and 150 feet long, roughly three-quarters the size of official NHL rinks. The problem isnt moving the snow around, its getting the final 1/2-inch of snow off the ice for a smooth surface, Read says. The zero-turn maneuverability allows a Grasshopper and a rotary broom to clear each rink in less than 10 minutes. It does the job of a zamboni  without the water  clearing every last flake from the rinks after each match. We couldnt keep the tournament moving if we didnt have the Grasshopper, says Read. Its just the perfect tool. Not only does it cut grass well, its great for snow removal, too. 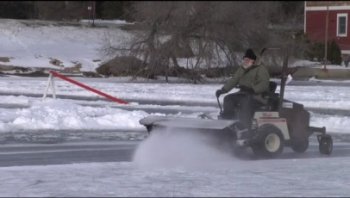 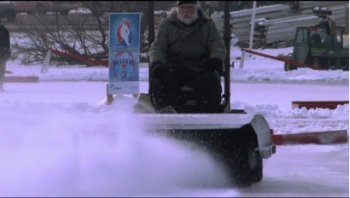