Puerto Rico is home to one of three United States Department of Agriculture Tropical Agricultural Research Stations (TARS). Its mission is to research ways of improving the genetic diversity in dry bean and sorghum crops as well as to improve yields of traditional tropical/subtropical crops of importance to the U.S. The station in Puerto Rico consists of three locations  Mayagüez, Isabela and Corosa  totaling nearly 200 acres. The U.S. Congress authorized the establishment of an Agricultural Experiment Station in 1901 in Puerto Rico and out of this beginning the TARS program was founded. The tropical plant collection on the grounds of TARS is one of the finest and best documented in the Western Hemisphere. The collection consists of more than 2,000 permanently established species including camphor, teak, mahogany, cinnamon, nutmeg, rubber, coffee, bamboo, various palms and tropical fruits, vanilla, bay oil, manila hemp, black pepper, and cacao. Maintaining the grounds at one of Puerto Ricos most prestigious research agencies poses demands somewhat familiar to those experienced in southern Florida: year-round growth, months of excessive moisture and groves of highly prized plant species that create obstacle nightmares. The headquarters, located in Mayagüez near the University of Puerto Rico, is a tropical garden showcase with a beautiful main building, residential area and immaculately groomed grounds. Roughly 35 acres are maintained using a Grasshopper 722D FrontMount mower. The grounds are mowed weekly during the rainy season from May to October, and every other week during the rest of the year. TARS conducts a tropical fruit introduction program at the 120-acre Isabela location about 30 miles north of Mayagüez. The program selects and maintains living collections of tropical/subtropical germplasm with economic potential for the warm-humid areas of the continental and insular United States. The program maintains virus and disease-free clones of these fruits for safe exchange and distribution. It also evaluates and selects promising clones for yield and fruit quality, and for tolerance to pests, diseases and abiotic stresses. Tropical climates mean plenty of growth in foliage. It is particularly important to keep the grass mowed around the many varieties of fruit trees that are cultivated at Isabela. The many groves provide plenty of obstacles that only a zero-turn mower like Grasshopper can make easy work of. The groves consist of hundreds of mango, lychee, banana, papaya and other fruit trees. Two 722D mowers are used to keep the grass trimmed around the trees. TARS conducts a variety of research on the island besides the tropical fruit introduction program. The bean improvement program at Isabela helps provide varieties of disease- and drought-resistant beans to U.S. farmers that offer higher yields. Increased yields are accomplished by increasing the genetic diversity of the current narrow U.S. germplasm base and by incorporating genetic resistance to common biotic and abiotic stresses encountered in many bean production areas. To simulate longer daylight conditions found in the higher latitudes on the mainland during the summer growing season, they must use artificial light to lengthen the day. The fields are surrounded with several light poles that present mowing obstacles. All of these efforts by TARS and by the USDA are important to the United States and to the world. They continually work to protect our crops and improve their yields in an effort to feed a growing population. 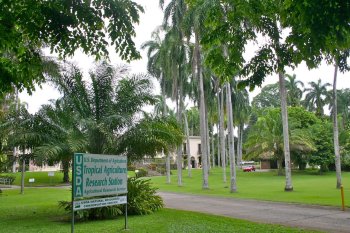 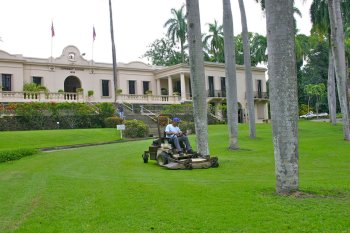 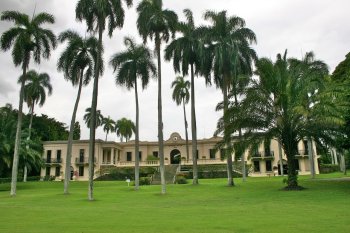