Demo a Grasshopper, and you'll never go back


When Monika Johnson had a mower go down, she borrowed a Grasshopper from a friend, because grass doesn't cut itself. That mower was 15 years old at the time, and even for that old of a model, it still ran great and was pretty comfortable, Johnson says. After that first experience, she test-drove a new Model 721 at a local dealership. It was 15 years newer, which meant it had only gotten better, she says. I was sold right then and there. Now, Johnson is the proud owner of four Grasshoppers, all of which she puts to work regularly at Johnson Lawn Care in Toledo, Ohio. Her fleet consists of two 329 MidMount models, one 325 MidMount and one 725 FrontMount. She also has two PowerVac collectors  one on a 329, the other on the 725  for fall leaf removal and clean up projects. She says that the 325 has more than 3,500 hours on it, and she doesnt have any reservations about putting it on jobs. Other mowers, you might think twice, but I dont hesitate to run that 325, Johnson says. Thats a testament right there to the quality of machinery Grasshopper makes. Even with that high number of hours, the regular preventative maintenance is quick and easy, and she hasnt had any real maintenance issues. My 721 had 3,000 hours on it when I traded up for the 725 and 325 in 2001, she says. You cant go backwards, you know. Were exclusively Grasshopper, and I wont use anything else. Aside from their durability, Johnson says that the biggest benefit she sees with her Grasshoppers is the high quality of cut they leave behind. To her, there isnt anything to compare them to, and she says that from what she sees, Grasshoppers are the best in the business. I like to be the best in this business, and I try to be, but I cant take all the credit, she says. My mowers are the real stars of this operation. She also appreciates the zero-turn maneuverability, versatility and increased productivity she gets from her Grasshoppers. She is able to do work for various clients, mostly commercial accounts with several residential properties in the mix, each with drastically different needs and wants. Grasshoppers leave a great cut wherever I take them. I can go from fields that have four- or five-foot-tall grass, knock it down good, and then go finish a manicured yard, all with the same machine, Johnson says. As a result, Johnson has built a successful mowing business from the ground up based on referral and word-of-mouth advertising only, a phenomenon she credits directly to using Grasshopper equipment. Nothing has contributed more to the growth than Grasshopper. I can mow faster, so I am more productive, which means I can do more in a day, she says. The business is as big as it can be right now, and Grasshopper has definitely been the driving factor. 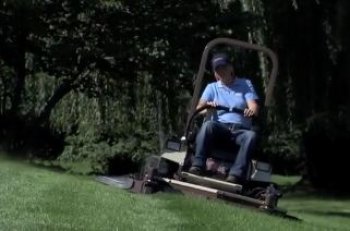 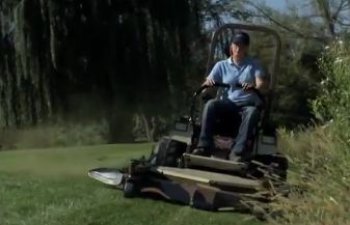