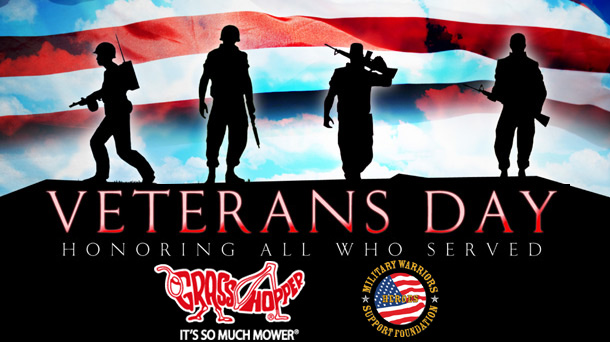 There is a day in November  dedicated to giving thanks. It's today. November 11. Veterans Day. As our nation remembers those who have so faithfully answered the call of duty and service, The Grasshopper Company is doing its part to honor those who have served and currently serve in our nation's armed forces.

In addition to donating a zero-turn mower to a veteran every year, Grasshopper donates 100 percent of the profits from every sale of co-branded, camouflaged MWSF/Grasshopper gear to MWSF. MWSF awards 100-percent mortgage-free homes to combat-wounded veterans of the conflicts in Iraq and Afghanistan through its ÂÂHomes4WoundedHeroesÂÂ program. Each selected recipient also receives three years of family and financial mentoring so that they can learn the skills necessary to become successful homeowners.

Now, do your part for our veterans

You don't have to donate a zero-turn mower. You can donate a small monetary gift to Military Warriors Support Foundation. Or, donate your time. Mow a veteran's yard. Rake their leaves. Keep their sidewalk clear of snow. You could buy some MWSF/Grasshopper gear, something for you and something for them. Let them know they are not forgotten, that they have our respect and our thanks. Because they've earned it.   Thank you, all you who have served our great nation!